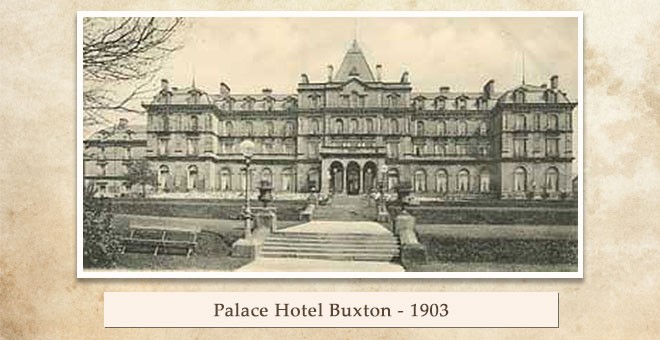 The History of the Palace Hotel Buxton

In the heart of the Peak District you will find the beautiful Palace Hotel and Spa. Located in Buxton, the highest market town in England (over 1000 feet above sea level), the Hotel is a popular and much loved historical focal point of Buxton’s culture. Dating back to the 19th century, the Palace Hotel is rich in history and is one of the largest hotels in the Peak District.

It is believed that the market town dates back many centuries and was founded by the Romans due to the attraction in the area of the abundance of warm springs that were found near the River Wye. After discovering this, the Romans built thermal baths in the town which later went on to become the main source of income for the area. Further down the line, around the late 19th century, Buxton began to be recognised for its limestone quarrying, which became a major industry in the area and was transported by railway to the rest of the UK. To this day, Buxton is still identified as a spa town and is a popular destination for tourists. The backstory of this visually stunning Hotel and Spa is outlined below, taking you through its fascinating history, leading us to the Hotel that stands today.

The Palace Hotel and Spa, built in 1863, became a key feature of Buxton’s skyline and consisted of 122 rooms. This became a prominent property in the town due to its grand architecture and impressive style, designed by Henry Currey, architect to the 7th Duke of Devonshire, in 1857. Situated on the hill above the railway station, the grand opening of the building proved to be a notable event, gaining a mention in the local newspaper, something that was unheard of in its time. It has been stated that the celebrations that surrounded the opening boosted the fame and reputation of Buxton town in nearby areas, which thus benefitted the local town’s businesses.

The building and its surroundings were very impressive, mainly due to its sheer size, stretching over more than five acres. Set in stunning landscaped gardens, the Palace Hotel featured an internationally admired ball room, luxury gardens fitted with croquet lawns, and a tennis court. The hotel also provided its guests with hot and cold water in each room, which was revolutionary and an advanced amenity during the late 18th century. After several years, the hotel became the first building in Buxton to be equipped with a telephone, a feature that was not only a luxury but rare in most hotels across Britain, and was given the number 22001.

The high standard of service at the Hotel meant that the Palace was a popular spot for wealthy travellers passing through the small Derbyshire town. The close proximity to the train station meant the hotel was also never lacking in guests, and was easily accessible for those who were using the Hotel as a pit stop whilst waiting for a connecting train or going about their business in town before returning home.

During both World Wars, the hotel was used as a base for various purposes. The hotel's role during World War I was perhaps the most significant, as the building became a base for the Canadian forces as a camp and hospital for their troops. During the Second World War, the Palace Hotel was used once again for various purposes and housed offices belonging to the British civil service whilst the War was taking place.

The Palace Hotel rooms were not always filled with simply business people and tourists; it has also seen the odd few celebrities pass through its doors. It was rumoured that silent film stars Kirk Douglas and Mary Pickford used the Palace as a meeting point during their love affair. In more recent years, Margaret Thatcher and Keith Chegwin were also customers who stayed at the hotel.

Along with celebrities passing down the halls, it has also believed that there have been several reportings of ghostly sightings over the years. Since the hotel opened, staff at the hotel have stated that they have felt a supernatural presence roaming the halls of the Palace Hotel. Not only does this remain a mystery to the staff, but also adds yet another layer of the Hotel’s history, making it a great place to stay for those looking to lodge in a history-laden building.

In more recent years, the Palace Hotel has remained a popular destination for visitors wanting to explore Derbyshire due to its picturesque surroundings and its convenient location on the edge of the Peak District’s National Park. The Britannia Palace Hotel and Spa has a wide range of facilities, consisting of 122 rooms, an indoor pool, bar, health and leisure club, conference rooms catering for up to 500 delegates, and it now provides a range of wedding packages. The Palace Hotel is without a doubt a treasured building in Buxton’s town along with being treasured as one of Britannia’s most beautiful Hotel and Spas.