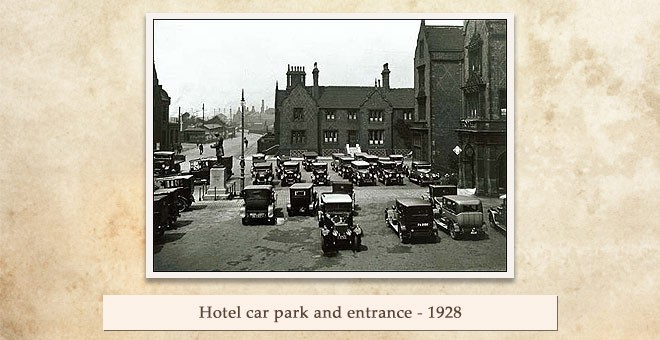 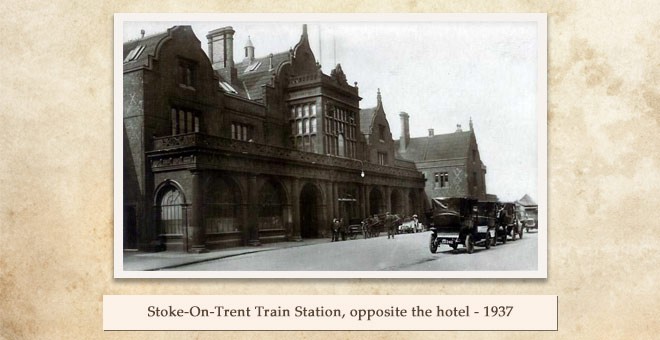 The History of the North Stafford Hotel

Our North Stafford Hotel is situated in the heart of Stoke-on-Trent, Staffordshire. Filled with rich industrial heritage and history, Stoke-on-Trent is a truly intriguing area of Britain which is also known as the ‘world’s centre of ceramics’. Home to the pottery industry, which dates back to the 17th century, Stoke-on-Trent was labelled as the ‘Potteries’ and was the main centre for pottery manufacturing in the UK.  Subsequently, it has also been the base for many famous ceramic companies such as the Royal Doulton and Dudson, along with several others. It has been noted that the pottery origins came about due to the abundance of coal and clay in North Staffordshire, which was also an area that became a major centre for coal mining.

The North Stafford Hotel is one of the oldest and most historically significant hotels in Stoke. An integral part of the central square’s layout, this building is intimately linked to the town’s history, and had a role to play in several of the historic occurrences to take place over the past two centuries. This hotel has a fascinating history over the years that is well worth dwelling into.

The North Stafford Hotel was built in 1840 by architect John Jay, on behalf of the North Staffordshire Railway Company. Working with a budget of £9,000, (amounting to £863,000 today) Jay sought to replicate the look of Stoke-on-Trent station, whilst following a traditional ‘E’-shaped plan of an Elizabethan manor. The result of this was a unique and visually striking building, which went on to become one of the most recognisable in Stoke’s town centre. It has been noted that the North Stafford Hotel is one of the finest examples of Neo-Jacobean architecture and Victorian urban planning in the whole of Stoke.

However, the hotel consisted of more than just its exterior; careful management and commitment to service and comfort quickly gave it a good reputation in the surrounding area. A few years later, it had become regarded as one of Stoke-on-Trent’s cornerstones. Arguably its finest moment came in 1910, when it was elected as the site for the first meeting of the recently-instated County Borough of Stoke-on-Trent, in which the old Six Towns were unified into a single borough. It was noted that the North Stafford hotel was chosen to host this conference due to its high quality service. This meeting remains one of the most important events in the history of the North Stafford, and perhaps was one of the most memorable ones, to those familiar with the hotel’s background.

Unfortunately, the reputable service it held was short lived, and things would only get worse for the hotel. The North Stafford Railway’s (NSR) attempt to lease out the hotel, in the 1910s and 1920s, had limited success, which resulted in the building being left to deteriorate. By 1923, when the London Midland and Scottish Railway (LMS) took over the North Stafford Railway, the building’s ownership had left the hotel in a dire state and in urgent need of refurbishment and renovation.

The LMS set about fully renovating the building in 1931. This costly and time-consuming effort eventually proved successful, as the North Stafford slowly but surely regained its identity as a convenient and ideally located railway hotel. Further repairs that were less successful in preserving the original hotel’s design played a part in modernising the North Stafford, ensuring it maintained its appeal to more modern day travellers passing through Stoke-on-Trent.

Despite the updates, the North Stafford was still considered significant enough from both historic and architectural perspectives to be made into a Grade II listed building in 1972, and remains one of the four listed buildings opposite the railway station to this day. The Hotel is situated on Winton Square – the square directly opposite the Stoke-on-Trent railway station – and is in the most historically significant part of town.

In 1953 the hotel was sold by British Rail, and passed into private ownership for almost fifty years, until Britannia Hotels expressed interest in 2002.

Britannia bid to purchase it, which was accepted, and the hotel changed ownership yet again. Since then, the most recognisable and iconic hotel in Stoke has been under Britannia management and continues to provide a warm and welcoming atmosphere, in a convenient location at a highly affordable price. The North Stafford Hotel now consists of 88 en-suite rooms, can hold up to 200 delegates for conferences and offers a range of wedding packages. This hotel is among our historic hotels due to its architecture, location, and beautiful exterior that holds its impressive history throughout the years.